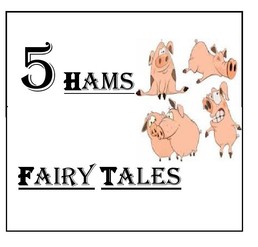 5 Hams Fairy Tales from Thoreau, NM – A Production Company
A modernized take on the old Rocky & Bullwinkle shows – think Shrek and Vaudeville smashed together. Written by Norm D. Plume and James Michael Shoberg, 5 Hams is a comedic series of puns and slapstick-filled skits – just enough shtick to stick to your ribs! Come enjoy some song, some dance, some seltzer down yer pants!

The Stuff of Fairy Tales

Back in 2008, as a result of President Obama's call for community service, we decided to produce a show for our local library. Because that's what we do: we're a small-by- choice, local-to- Pittsburgh theatre company. So we walked in and told them, and they said ok. We rehearsed for about a month in the meeting room, and in short order, presented a "Real Live" version of the old Fractured Fairy Tales (circa 1960s Rocky and Bullwinkle TV shows)! The Children's Librarian displayed relevant fairy tale books, and it all went so well, we did it again the next year, at three different local Carnegie Libraries! So this year we're doing it again! With an extremely talented cast of 5, we have begun rehearsals for 5 Hams Fairy Tales, which is another comedic romp around the Hansel and Gretel and Snow White stories. Think Shrek meets Vaudeville. Modernized and updated, 5 Hams is strewn with painful puns, rhyming monologues, and just enough shtick to stick to your ribs!

This year's incarnation will be open for the public to enjoy at Carnegie Library South Side, on Saturday, April 9th at noon, in advance of the premier production for the Pittsburgh Fringe Festival, April 15-17, on the North Side. All of the Librarians involved have been supportive above and beyond the call of duty and we can't thank them enough! When we first set out, we hoped that we could do this regularly, and so, far, so good!