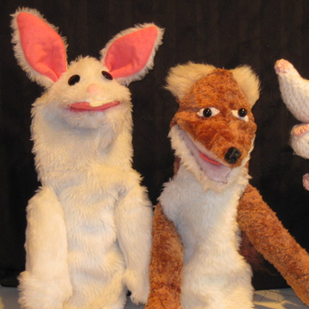 Critters by Puppets in Performance
“Critters,” a humorous collection of skits about woodland animals, was originally written by puppeteer Darlene Fedele for No Shame Theater in Roanoke, Virginia, where it was performed one skit at a time. Later, it was incorporated into a single show, 30 minutes long. Its first performance in this format was at Pop's Ice Cream Parlor in Roanoke. It has been performed in the Pittsburgh area at Unity in the Community, the Garfield Night Market, and the Butler County Farm Tour. Intended for all ages, it's humorous, cute, and some of the pieces incorporate music. Some of the characters are a beaver who pretends to be magic to save his species from extinction, a skunk who tries to sell perfume, and a “dangerous” dog who meets his match. Cast: Henry operates Farmer Phil, Forrest the Fox, Castor the Beaver, Carney the Wolf, the Crow, the Dangerous Dog, and Fiona the Cat; Darlene operates Clarissa, Dee Dee the Skunk, Penelope and Petey, Herb the Rabbit, the Raccoon, and Blossom the Possum.

About the Company:
Puppets in Performance, a company of puppeteers using hand puppets, was originally conceived and produced by Darlene Fedele in 2011 in Roanoke, Virginia, where at the time, she was pursuing an MFA in Playwriting. After moving to the Pittsburgh area in 2014, Darlene met Henry Tucker, and together they have performed at numerous venues in the area, including the Garfield Night Market, Unity in the Community, the Lovelace Puppet Festival, and the Butler County Farm Tour, as well as at various open mics. All the material is written by Fedele, and most of the puppets are constructed by her as well. Most of the plays are family-friendly and humorous. Some have accompanying music.